Serious Beat down and feet of pain. 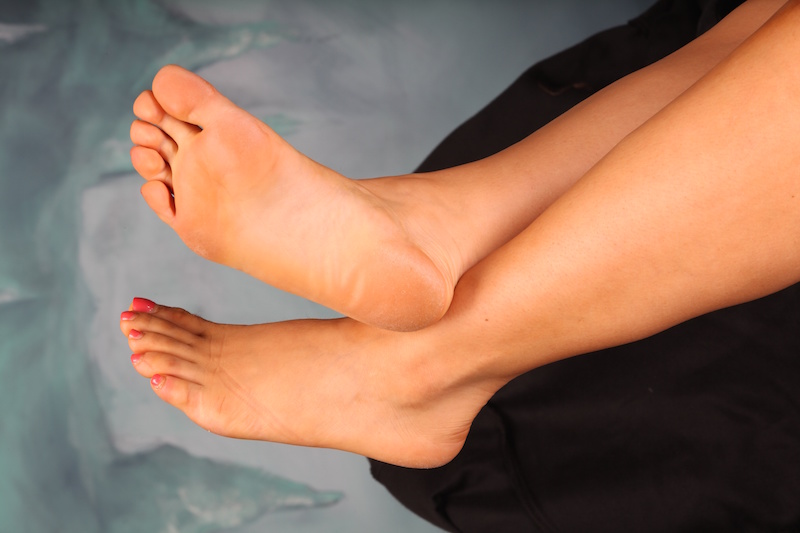 Lady Carla was training martial arts for more than 16 years now she is 26 and she a goddess. She has studied karate, Savate, Judo, Aikido, Tang soo do and taekwondo and Brazilian Jiujitsu. She always trained hard, and has an excellent style. She was out of most peoples league within a few years of her starting and she was always one of fastest fighters, her kicks were so powerful, unstoppable and she loved to hurt people…

This was one of those days when she took part in and as usual won a local tournament. She always enters to win and she has never met a female fighter who could rival her. Even the male partners are not comfortable against her. In the last five years Lady Carla hasn’t lost any fights against men or women.

This day she was alone in the dojo, she was training some high kicks and punches she was dressed her white pants and a short t-shirt. Her muscular belly was naked, showing her pierced belly button. It was difficult to see her punches and kicks with the naked eye. So, so very fast. She was thinking about last fight of the tournament; she had broken the nose of a girl; she felt a little sorry for her, however she didn’t feel guilty, it was an honest and quite a brutal fight.

She hears the sound of an opening door. It was quite late and it a was Sunday, no one else was due at the dojo. As she turned, she saw him. A man with black hair, who was dressed in a black gi was looking at her. He must have been 28 or 30 years old, maybe four or five inches taller than her and of a big build.

“Who are you?” she asked. “You will learn, as I break your nose”. he shouted. Lady Carla remembers this face, she saw him in the tournament, he must be the boyfriend or the brother of the girl. Lady Carla wasn’t frightened, however she was exited, the boy was looking in good shape and this could be an interesting challenge for her. “Listen” Lady Carla says, “I didn’t want to hurt her, it was a fair competition” ” Well I will be hurting you” he said. And before the last words he come out he ran and took a jump. A flying hick kick was targeted at Lady Carla pretty face. She moved quickly to the left side and her right roundhouse kick was launched in a lighting speed flash.

However the guy prevented the kick with his right arm and he countered with a kick to her bare belly with his left foot. Ugh !!! she exhaled all the air of her lungs. The sole of his foot smashed her gut. Even her hardened abdominal muscles weren’t ready for this kick. She moved two steps back; the speed of the kick and the force of the impact surprised her. This will not be easy she thinks to herself. In a second the guy unleashed a second kick targeting her face; she draws back her face instinctively and the kick misses, but the attack continues with sidekick that catches her ribs… Agh !!!

Despite the pain she counter attack with two high kicks that the guy avoided easily. However he is now in defensive position and Lady Carla continues her offensive moves, two round kicks and one direct punch that hits the air. He goes back several steps.Lady Carla does not waste this opportunity, she jumps up and forward and sends a flying high kick towards his head. Her expertly trained foot, poised in a sharp sword edge, catches him squarely on the bridge of the nose, as her powerful attack follows right through to the back of his head as she extends her limb fully on impact, his nose shatters and explodes with blood.

Carla’s feet are small and the painted toes make them look so cute,

however, years of shattering blocks and training barefoot has made them into the hardest of weapons. She intended to show him that fact. The guy was in a world of pain now, against the dojo wall now with his hands in his bleeding face, distracted and Carla would use that to her advantage. She gave him a right cross punch that collided to the abdomen of the guy.

Lady Carla was furious now and she just didn’t want to stop…every blow made her wetter… down below ! She continued the attack with some crescent kicks with the inside and the outside of her dusty, solid feet. The guy just could not prevent them striking his face again and again. The impact of the bare feet knocked him sideward and back again,

Whap, Whap! Lady Carla knows that she must finish him right now. Without even looking through his beaten eyes, he launched a random kick… Lady Carla easily caught hold of and held his foot in one hand and in a flowing movement she twisted it violently, using her leg to sweep his from under him…he crashed down onto the mat. Lady Carla’s powerful leg went up again, right up, vertically, she screamed out a KKIIIIIAAAHHHH and pulled her foot back and dropped a tough calloused heel onto his now vulnerable back. The crack was loud…. “OHHHH that must have hurt” she exclaimed! Lady Carla walked in front of him, stood there, a few meters away from his face, she caught her breath, made sure he was watching and with awesome skill she shot her leg out in a vertical side kick.

Her toes were painted red.

The big toe was bent sharply upward and the rest of her toes sharply down, making a razor-sharp blade with the side of her pretty but dusty foot. The kick was well above head high and she held it there. Licking her own lips. He looked at her and gulped from his position on the floor. “I hope that you are hungry” she said. He looked puzzled. “Because I am so angry now and you are going to eat this” she looked at her foot, still way up in the air. Lady Carla continued…” I am now going to totally reduce you to a quivering wreck, using just my feet to destroy your already damaged body…and when I am done, you will be begging for mercy and you’ll realise what I could have done to you and to that girl in the tournament”.

He shook his head in disbelief and came slowly, painfully to his feet. She returned her killer foot to the floor, then as if to taught him more Lady Carla lifted her other foot and planted the ball of her foot into the hard woodblock floor and twisted it, just like putting out a cigarette. Her blue eyes were on fire. “I’m just putting a bit more flavour on them for you” she taunted. His face screwed up in anger. But he had no time to do a thing. Lady Carla walked towards him lifted her knee up to her chest and with both fists clenched tight she thrust her leg out and upward. The pretty red toes bent back hard revelling the dust-covered  ball of her foot, a deadly weapon. It flew at him, he had no chance at all. Hit him square in the mouth, she had aimed way past his stupid head, she felt his teeth give way to the hard ball as it drove past them and it made her tingle indide, his head snapped back and he almost somersaulted backwards as he fell.

With total defiance Lady Carla left her leg outstretched, knowing he wouldn’t stand any chance of grabbing it now. His hands came up to his mouth, trying to save the already doomed, shattered teeth. “MMmmmmmm taste good”? she laughed ” TELL ME, DID MY FOOT TASTE GOOD”? she screams at him. “TELL ME”. Lady Carla walked slowly towards him. Any normal untrained man would have been out cold, but he had taken blows before. “Want some desert?” she added. “the blade might taste even better than the ball” she said smiling to make matters worse. She menacingly waved this deadly blade of a foot near to his bleeding face as she spoke…

She was actually enjoying this now… It was turning her on ! “I was telling the truth when I said I didn’t want to hurt her you know” she said, “But, you shouldn’t have got involved, I am going to tear you to bits with my little feet” she added, mocking him, taking great pleasure in watching him shake now in fear of her… By now he had crawled away and used a bar at the back of the dojo to lift himself to his feet. Still shaking and holding his mouth. She slowly approached him. He tried to say sorry, but, teeth and blood made it sound like a gurgle and besides it was too late for that now, she wanted more.

She needed more…needed more of this feeling….a feeling of ultimate power…

“It’s all very well practicing on wood and concrete blocks, but I always wanted to see what someone’s face would feel like up against my feet” She said evilly. ” I guess I know now” !! With no more warning she screamed “KIAAAAAAAAAAIIIIIAAH” Her lethal, powerful side kick shot out from the hip, and up. Toes automatically out of harms way, this pretty foot becoming a deadly weapon, yet again. The sword edge of her foot  and the top of it looked really sexy and smooth. To him though, it felt like a knife and it cut like one too. The blade caught him just under the chin “EAT THAT” she screamed… the crack was audible, she didn’t give him a chance to fall, retracting the powerful limb and straightening back out, harder this time and slightly higher, her aim was just as deadly as her strength. “FUCKING EAT IT” she screamed.

She connected with his temple, judging the power, so as not to kill him. Down he went. She checked that he was not dead. She slapped his face with her foot, his eyes now black, opened… She stood. He was very aware of her sole descending onto his face. The bottoms of her feet were black with dust. At the last second her toes curled back and she placed the ball onto his broken lips. “NOW YOU SHOW ME THE RESPECT I DESERVE, KISS IT” She laughed at him. Full of self-confidence. He felt what few teeth he had left move against the rock hard ball that had given him so much pain. He kissed anyway, defeated. “NOW LICK IT, then you can thank me for sparing you” she said. His tongue licked at the dust-covered soles and that deadly ball.

Lady Carla made him totally clean both of her weapons until they were clean.

Then said, “I wouldn’t come here again if I were you, or we will have to do this all over again”. Then she turned and walked to the door. Set up at the side of the exit was a frame with three thick planks of wood, positioned for breaking. She glanced at the broken man, to make sure that yet again he was watching her every move. Then she jumped up and spun around. Screaming the loudest “Kiahhh” possible her hard heel smashed through the thick wood like a hammer through butter. Splinters of wood flew everywhere as the 3 planks disintegrated. With a smile on her face… Lady Carla picked up her kit bag and left the dojo saying, “THERE,THAT WOULD HAVE killed you, oh and doing it to your face DID feel much better for me” !!